Business Intelligence
What is it and why business needs bother?
Complex to Fundamental
An effective way to diffuse traceability across industry
Tackle Consumer Food Waste
Introduce a conceptual framework based on IoT and artificial intelligence

Artificial intelligence (AI) is an academic field that studies how to create computers and computer software which are capable of intelligent behavior. The major concerns of AI research include reasoning and planning, learning and adapting, and the ability to interact with the real world. AI researchers study and design "intelligent agents" that perceives its environment and takes actions to maximize its chance of success.

Fuzzy logic is used in artificial intelligence as a way to represent human knowledge. As a principal mean of mapping knowledge, Fuzzy logic has been employed in such diverse areas as engineering, management, behavioural science etc. to solve complex systematic issues. For example, a rule-based expert system and a fuzzy screening technique can be used in fashion industry to simulate fashion designers to recommend appropriate fashion product items for cross-selling. Researchers have developed centralized and decentralized pricing models based on fuzzy logic, to solve the pricing problem of substitutable products in a supply chain with manufacturers and retailers. It provides a mathematical means for dealing with uncertainty.

Our research borrows the concept of a closed-loop control system from control engineering and employ the Internet of Things (IoT) sensor network to realize a closed-loop consumer food consumption system. A dedicated control law is designed to control the consumer food waste to reduce it a minimum. The design of a classic controller is on the basis of system modelling. The consumer food consumption system has huge uncertainty and complex dynamics which leads to a great difficulty of generating an accurate mathematical model, and therefore the classic control theory may not be able to achieve ideal performance. Fuzzy logic, on the other hand, provides a mathematical means for dealing with uncertainty, and in control engineering, it maps expert knowledge into control system to cope with complicated dynamics without system modelling.

Our fuzzy logic controller in the closed-loop consumer food consumption system named as Fuzzy Promotion Generator (FPG) contains several fundamental modules. The primary module is promotion knowledge base that keeps the human knowledge of using promotion to reduce consumer food waste. In essence, the knowledge illustrates that, if a particular size of packaged food is normally disposed of with a large portion remaining, then it is regarded as oversized and, consequently, a smaller packed edition needs to be promoted by the retailer until the waste falls to a low level (ultimately zero). The rule base defines a set of if-then linguistic rules to map the promotion knowledge into the control system; the data base keeps all the properties and parameters of the fuzzy sets, including universe of discourse and membership function etc. 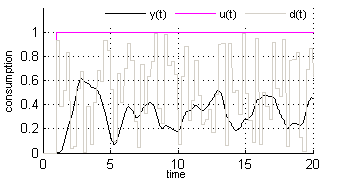 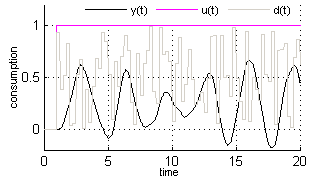 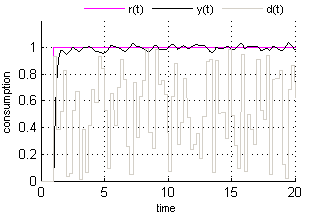 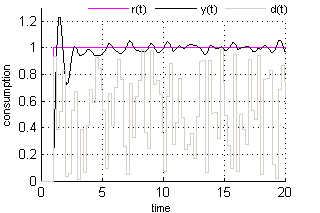 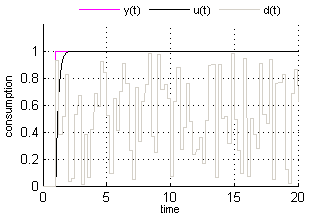 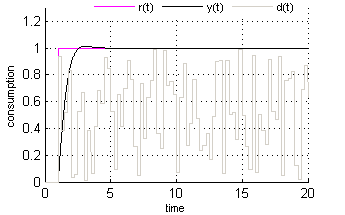 We simulate FPG against the consumer food consumption system. The top two figures show the uncontrolled consumer food consumption has a big steady-state error which reflects a constant huge food waste in reality, as well as vibrates severely and irregularly which reflects an unpredictable fluctuation in consumer food waste. As the results shown in the middle two figures, the FPG controlled system eliminates the steady-state error and reduce the vibration substantially. The results in the bottom two figures are the FPG with an adaptive mechanism to deal with system uncertainty, which shows even better performance.

Fuzzy logic has the power of mapping sophisticated expert knowledge into the control system, which provides a great potential for the promotion design. A set of more complex if-then rules with multiple antecedent clauses can be used to address both food waste and retailers' major concerns such as profit and shelf space etc. We set a methodological starting point for a more sophisticated promotion optimization and committed to working closely with retailers and consumers.